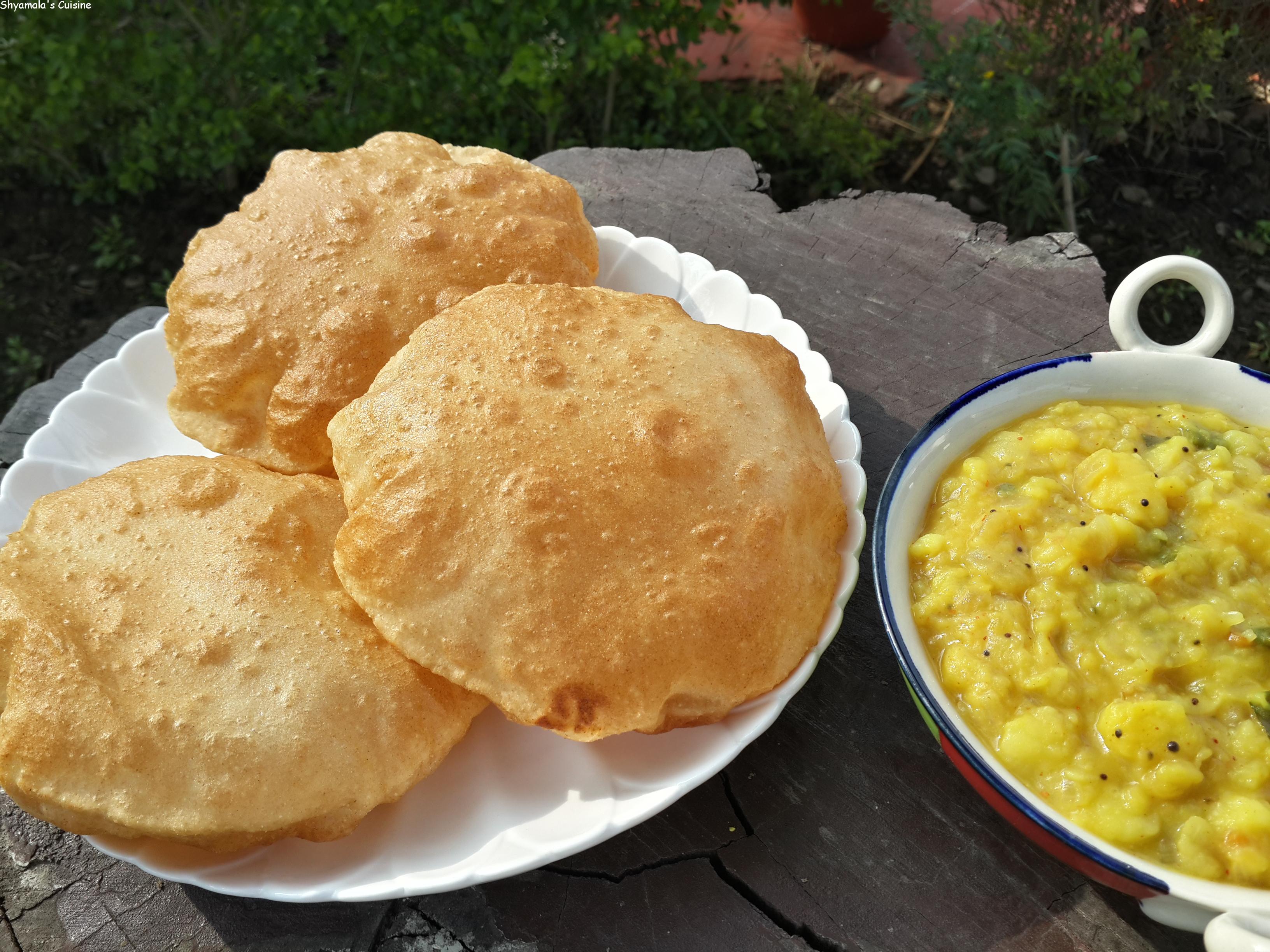 ‘Poori Khizhangu‘ is a magical combination that instantly satisfies our taste buds. For us, it’s one of our comfort foods. It fills our tummy and soul alike. Though, there are many versions of this delectable recipe popular across India, each one is unique in its own way. One such kind is Nellai’s Poori Khizhangu.

It is one of the most sought-after breakfast menus in eateries and households in Nellai district, Tamilnadu. Silky soft pooris are served with Urulai Khizhangu (potato) side dish called ‘Masaal’ which is super delicious and rich in flavour.

The localites say, the secret ingredient of this recipe is ‘Tamirabarani’s water’, a perennial river that is the lifeline of the Nellai district. This may be true because whenever we had a chance to relish their local food, it was absolutely appetizing, scrumptious and out-of-the-world dishes that are prepared using simple, locally grown ingredients.

For over many years, I have tried replicating Nellai’s poori khizhangu recipe that I have relished many times in my native place, Kallidai Kurichi in Nellai district. Poori came out perfect in one or two trials, but I couldn’t
get the exact taste of the Khizhangu like the original one. After many try-outs, l understood the proportion of onions to potatoes and the handling of onions in this recipe. Here’s the recipe that tastes similar to Nellai’s recipe…

This site uses Akismet to reduce spam. Learn how your comment data is processed.

Translate into your language!

Follow This Blog
Get Updates On New Recipes
FB Page

Instagram
Eggless Rich-fruit Plum Cakes @ Delicious Galore!
Introducing DIY Gluten-free Cookie Jar Mix - a perfect gift for your family and friends, this festive season!
#applauseforacause #armywivesinitiative #trivenicomplex #awwaentrepreneurs
We are the 'Olive Dream Weavers,' - An eclectic ensemble of Army Wives plucky enough to think outside the box and venture where not many women have gone before; making our mark as confident and experienced entrepreneurs today.
Turkish Cream Cheese Truffle with Basil and Walnuts..
Feedbacks or words of appreciation is what keeps us the entrepreneurs motivated😇..
This Diwali @ Delicious Galore!!..
Happy Diwali to all🌸🌼🎊🎉
Happy Ganesh Chaturthi to all 🙏💐🌸🌼
Jalapeño Pepper Jam
Trending Recipes
Top Posts
Go to mobile version
Loading Comments...
%d bloggers like this: